In the riveting conclusion to the Virals series, Tory and the others are nearing an impossible choice—and the ultimate showdown.

Terminal finds Tory Brennan—grandniece of the famous forensic anthropologist (star of the hit show Bones)—and the rest of the Morris Island gang tracking a pack of rogue Virals who call themselves the Trinity. The new pack was infected by a strain of supervirus created by Tory’s nemesis and sometimes-crush, Chance Clayborne, who accidentally infected himself, too.

These red-eyed Virals have openly challenged Tory’s pack for domination of Charleston, bringing on the attention of a shadowy government organization intent on learning the secret to their powers. Surviving it all is going to test the limits of the gang’s abilities.

See what Goodreads readers are saying about TERMINAL! Get your paperback copy TUESDAY, MARCH 1! 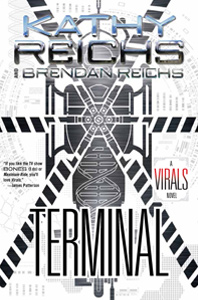