My Interview with The Big Thrill 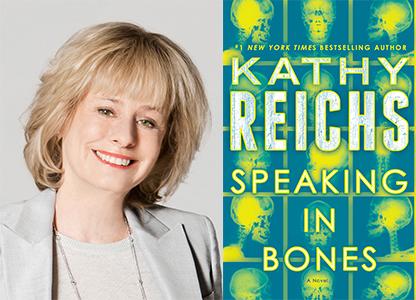 Speaking in Bones by Kathy Reichs

How She Gets It Right in Her Best-selling Series With its whip-smart, hyper-focused protagonist, forensic anthropologist Temperance Brennan, the “Bones” thriller series stands out for both its authenticity and its excellent pacing. Author Kathy Reichs, herself a certified forensic anthropologist, has written seventeen bestsellers and her novels are the basis of the long-running Fox series “Bones.” In an interview with The Big Thrill, Reichs, the winner of International Thriller Writers’ Silver Bullet Award for 2015, speaks frankly about the importance of accuracy in both the forensic sciences and the thriller-writing field, and shares some of the secrets to her writing success.

One of the things that interests me most about SPEAKING IN BONES is it shines a light on web-sleuthing. The key character Hazel Strike sets the plot in motion when she pushes her way in to see Dr. Brennan because she’s become obsessed with a missing-person case. Hazel doesn’t know the girl in question but has become an amateur sleuth using the Internet, and then takes it further, with frightening results. What led you to the phenomenon of web-sleuthing?

It’s like any book. I’m always on the look-out, my antennae are always up, for interesting things going on. Somewhere along the way I stumbled onto web-sleuthing. My son and I write the Virals young-adult series, and we did something in our third book about Geocaching. It’s a game people play online. So when I heard about web-sleuthing, it sounded similar in that thousands of people worldwide do it. I thought my readers might like to find out about it and about sites that have unidentified remains and sites that have missing persons.

Do you feel that the lines are blurring between professional forensics specialists and web-sleuths on the solving of crimes?

There are some people who say, “Oh if I had it all to do over again, I’d be a forensic anthropologist or a forensic scientist.” I think it’s a way that people can enter that world. It’s almost like thriller readers. They want a glimpse into a world. They don’t necessarily want to go to a crime scene or perform an autopsy or be in the forensic lab. This takes it a step further: they’re actually working with real cases out there, from the privacy of their own home.

How many people are actually employed in the field of forensic anthropology in the U.S.?

That’s a small group! I guess that proves the rigor of the training. It’s a long haul and it’s a lot of work. To be a serious player in the field, first you have to have a Ph.D. followed by three years of practice with mentorship. Then you have to sit for your board certification examination. When you pass that, you are certified by the American Board of Forensic Anthropology. We all know each other by name, if not personally. Certification is much more important now than in the early days. Because in the last two decades the field became very popular. Suddenly everybody was hanging out a shingle. “I’ve got a degree in anthropology, now I’m going to be a forensic anthropologist.” That has happened in all the forensic sciences.

And that caused problems?

How do the courts, how does law enforcement, how does a judge who’s qualifying a witness, determine who’s a legitimate expert in the field. And also at the entry point, how do the cops know who to call or how does the attorney know who to call? Also the military employs a lot of forensic anthropologists.

Were there instances of unqualified people assisting law enforcement or giving testimony and leading to real mistakes?

Yes. Now the whole field of forensic science is putting itself under very rigorous reevaluation.

Why did you become involved in the Casey Anthony case as a forensic anthropologist?

I worked for the defense. I accepted to do that, to look at the remains, because I was offended by how this trial was taking place in the media. I don’t even know if you’d call them journalists, but certain individuals on the airways had her convicted and sent to jail. And that’s not how our system works. You are supposed to be tried by your peers in a court of law. My role was to visit the site, examine the skeleton, and analyze other statements made by other forensic anthropologists in the case.

How many real cases can you take on these days?

I don’t go into the lab on a regular basis now. Every year I write an episode for the series “Bones,” I write a YA book, and I write a Temperance Brennan book.

With all of your scientific expertise, you must have a hard time with any inaccuracy in crime-fiction novels. I just did a panel on medical thrillers at Thrillerfest. And I think the consensus of our panel is that thriller writers sometimes just sort of drop the ball on that. They don’t do their research and then when you’re reading the book and see something inaccurate, it just for me spoils the whole story. Why didn’t they get on the Internet, why didn’t they pick up the phone, why didn’t they find an expert and then roll the one or two sentences past that chemist, the dentist, the ballistics expert? Get it right.

Do you show your work pre-publication to other experts?

I do. I am lucky because I have worked in a full spectrum crime and medical legal lab so they’re colleagues. I don’t have to beg a stranger to help me out. With one exception that I can think of.

Let’s discuss craft, because your novels are remarkably well paced and meld fast moving plot with tangible atmosphere and characters’ emotional arcs. How much do you plot a Temperance Brennan book ahead of writing?

Have you ever made a big change in the story midway through?

No, but sometimes when I start I don’t know who the perpetrator was, and as I get into the story it becomes clear to me who the killer is.

Forensic anthropology is a field with a lot of long words! How do you keep from committing the sin of “info dumps”?

You have to keep those parts short and jargon free. And you have to keep them entertaining. Yeah, you know a lot of stuff but the reader doesn’t need a lot of that in there. It’s a similar skill as when you talk to a jury. You don’t dumb it down, you keep it understandable and you keep them engaged and stay away from any kind of specialty jargon.

Your twists and use of foreshadowing, particularly at chapter ends, are very effective.

I work hard at chapter endings. I do. I’m often accused of keeping people up all night. Well, that’s my job. Kathy Reichs’s first novel Déjà Dead catapulted her to fame when it became a New York Times bestseller and won the 1997 Ellis Award for Best First Novel. Her other Temperance Brennan novels include Death du Jour, Deadly Décisions, Fatal Voyage, Grave Secrets, Bare Bones, Monday Mourning, Cross Bones, Break No Bones, Bones to Ashes, Devil Bones, 206 Bones,Spider Bones, Flash and Bones, Bones Are Forever, and Bones of the Lost, and the Temperance Brennan e-short, Bones In Her Pocket. Dr. Reichs is also a producer of the hit Fox TV series,Bones, which is based on her work and her novels.