I’d Kill For That 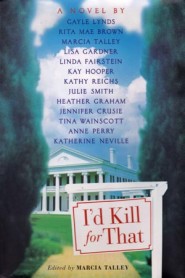 On the banks of the Truxton River lies Gryphon’s Gate, a gated community built by Henry Drysdale where the rich and privileged live, work and play. Tempers flare when Henry’s ex- decides to develop the adjoining land and environmentalists, developers, residents and the media clash. Then the violence turns ugly–a dead body is found on the golf course and Detective Diane Robards is called in to investigate. Diane’s efforts are thwarted at every turn and as she uncovers the secrets behind the serene facade of Gryphon’s Gate, she races against the clock to unmask a ruthless killer.