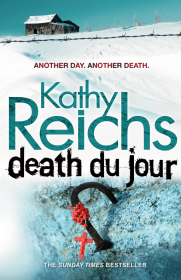 ‘Another day. Another death. Death du Jour. My God, how many such days would there be?’

On a bitterly cold March night in Montreal, forensic anthropologist Dr Temperance Brennan is exhuming the remains of a nun proposed for sainthood in the grounds of an old church.

Just hours later, Tempe is called to the scene of a horrific arson. A young family has perished, and there seems to be no witness, no motive, no explanation.

From the charred remains of the inferno, to a trail of sinister cult activity and a terrifying showdown during an ice storm, Tempe faces a nerve-shattering test of both her forensic expertise and her instinct for survival.