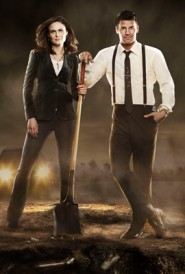 A journalist once queried, “What questions are you most frequently asked?” Good one. A question about questions. Like a Bones episode. Layers inside layers. The answer is easy. In descending order: how did Tempe score a TV series? How does the television character differ from that in your books?

Since authors write about what they know, my novels began with a job. My job. I am a forensic anthropologist. Thus, Temperance Brennan’s occupation was a given from the start. So were my plot lines. I draw story ideas from what I do.

Deja Dead is based on my first serial murder investigation. Death Du Jour derives from work I performed for the Catholic Church, and from the mass murder-suicides that took place within the Solar Temple cult. Deadly Decisions stems from the many bones brought to me grace a la Quebec Hells Angels. Fatal Voyage is based on my disaster recovery work. Grave Secrets was inspired by my participation in the exhumation of a Guatemalan mass grave. Bare Bones sprang from moose remains I examined for wildlife agents. Monday Mourning grew from three skeletons discovered in a pizza parlor basement. Cross Bones draws on my visit to Israel, incorporating strangely unreported Masada bones, a burial box supposedly that of Jesus’ brother, James, and a recently looted first-century tomb. Break No Bones goes back to my archaeological roots and examines the physical evidence of organ theft. Bones to Ashes originated with the discovery of a child’s skeleton in the Acadian heartland of Maritime Canada.

Okay. Real crime turned into thrillers. But why the leap to the small screen? The fit seemed natural. A strong leading lady. Stories of murder solved with gizmos and science.

How it all came together is a bit hazy to me. In the end, Barry Josephson liked the idea of a character that could be taken from the lab into varying work situations. Hart Hanson liked the idea of contrast, sometimes conflict, between the pragmatic, intuitive mind-set of the cop versus the deductive, analytical approach of the scientist. Johnny Law versus the squints. Thus, Bones was born.

From the outset it was important to me that the heroine of the series differ somewhat from that in my books. If the two were identical, how would that impact future novels? I often give nicknames to the victims I analyze at my lab. I guess I’ve done that with Bones, labeling the two manifestations of my character “TV Tempe” and “Book Tempe.”

TV Tempe is at an earlier stage of life than her literary counterpart. Younger, she is less sophisticated, with pop cultural awareness and people skills that still need polish. Instead of Montreal or the Carolinas, TV Tempe works in Washington, D.C., a setting I find particularly appropriate. As an undergraduate, I attended American University. The first skeleton I held in my hands was at the Smithsonian’s Natural History Museum, a template for the show’s Jeffersonian Institution.

Perhaps the fourth most frequently posed question concerns my satisfaction with the show. As development began, my hope was that the series capture the issues of forensic science, while simultaneously, showing the humanity of the participants, and the occasional humor needed to preserve emotional balance. I believe each episode does that beautifully. My role as a producer is to keep the science on track. I think I do a reasonably good job.

In my view, Emily’s portrayal of Tempe is perfect. She is a woman and a scientist struggling to control passion, maintain objectivity, and be sensitive to human vulnerability. To maintain humor and grace in a difficult and often heartrending occupation. David’s interpretation of Seeley Booth as an old style cop relying on instinct and legwork is dead on. So Tempe reads evidence while Booth reads people. Things aren’t always harmonious, but the chemistry between them couldn’t be better.

Eric, Michaela, TJ, and Tamara round out the dream team. Every actor, writer, and producer is a pleasure to work with. And the best part? No one complains when I do dumb things on set.

In sum, Bones is all I hoped it would be, with each episode underscoring the dedication of detectives and lab scientists working hand in hand in the pursuit of justice – the camaraderie, the teamwork, and yes, even the romance. Trust me. It happens. Cops and squints aren’t exclusively about bugs and bones.