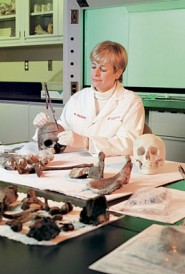 For sixty years, the American Academy of Forensic Sciences (AAFS) has served a distinguished and diverse membership.  Its 6,000 members are divided into eleven sections spanning the forensic enterprise.  Included among the Academy’s members are physicians, attorneys, dentists, toxicologists, physical anthropologists, document examiners, psychiatrists, physicists, engineers, criminalists, educators, digital evidence experts, and others.  Representing all 50 United States, Canada, and 60 other countries worldwide, they actively practice forensic science and, in many cases, teach and conduct research in the field as well.  Each section provides opportunities for professional development, personal contacts, awards, and recognition.  Many sections publish periodic newsletters and mailings which keep their members abreast of activities and developments in their field.

As a professional society dedicated to the application of science to the law, the AAFS is committed to the promotion of education and the elevation of accuracy, precision, and specificity in the forensic sciences.  It does so via the Journal of Forensic Sciences (its internationally recognized scientific journal), newsletters, its annual scientific meeting, the conduct of seminars and meetings, and the initiation of actions and reactions to various issues of concern.  For its members and affiliates, AAFS provides placement services as well as scientific reference studies.  As the world’s most prestigious forensic science organization, the AAFS represents its membership to the public and serves as the focal point for public information concerning the forensic science profession.  Founded in 1948, the AAFS is headquartered in Colorado Springs, CO.

American Board of Forensic Anthropology

The American Board of Forensic Anthropology was incorporated in 1977 as a non-profit organization to provide, in the public interest and the advancement of science, a program of certification in forensic anthropology.  In purpose and organization, the ABFA functions in much the same way as do certifying boards in various medical specialties and other scientific fields.

The FBI Academy, our national training facility, is located on 385 wooded acres on a Marine Corps base in Quantico, Virginia—about 36 miles outside Washington, D.C. Much of the FBI’s training takes place here—from minting new agents and analysts to grooming law enforcement leaders from around the world. The Academy also serves as a premier learning and research center, an advocate for best practices throughout the global criminal justice community, and a place where lasting partnerships are forged among law enforcement professionals worldwide.

The mission of the Joint POW/MIA Accounting Command (JPAC) is to achieve the fullest possible accounting of all Americans missing as a result of the nation’s past conflicts. The highest priority of the organization is the return of any living Americans that remain prisoners of war.  To date, the U.S. Government has not found any evidence that there are still American POWs in captivity from past U.S. conflicts.

DMORT is a Federal Level Response team designed to provide mortuary assistance in the case of a mass fatality incident or cemetery related incident.  DMORT works under the local jurisdictional authorities such as Coroner/Medical Examiners, Law Enforcement and Emergency Managers.

The Guatemalan Forensic Anthropology Foundation (Fundación de Antropología Forense de Guatemala, FAFG) is a non-governmental, autonomous, technical-scientific, not-for-profit organization that contributes to the strengthening of the justice system and to the respect for human rights through the investigation, documentation,  dissemination, education and awareness raising regarding the historic violations of the right to life and the cases of non-clarified deaths.  The FAFG also produces expert reports and conducts scientific investigations, applying both forensic and social sciences at a national and international level.

Crimes and Clues: The Art and Science of Criminal Investigation