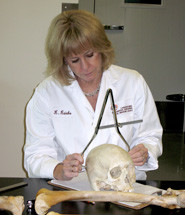 Dr. Reichs has taught symposia for medical and dental students at the North Carolina School of Medicine in Chapel Hill, NC and for residents in pathology at the Laboratoire de Sciences Judiciaires et de Médecine Légale in Montreal, Québec. She has been an Instructor for field courses in the recovery of human remains at the FBI Academy in Quantico, VA and for the Royal Canadian Mounted Police at the Canadian Police College in Ottawa, Canada.

Dr. Reichs has served as a forensic anthropology consultant to the Medical Examiner’s Office of Mecklenburg County in Charlotte, NC and the Office of the Chief Medical Examiner for the State of North Carolina in Chapel Hill, NC. She is currently a consultant to the Ministere de la Securite publique at the Laboratoire de Sciences Judiciaires et de Médecine Légale, in Montreal, Québec.

Dr. Reichs has published numerous professional works. She is Editor of three academic books: Hominid Origins: Inquiries Past and Present (1983), Forensic Osteology: Advances in the Identification of Human Remains (1986), and Forensic Osteology II: Advances in the Identification of Human Remains (1998). Additionally, she has contributed chapters to numerous other professional books in the field of forensic anthropology. Dr. Reichs has published articles in professional publications such as Central Issues in Anthropology, Journal of Forensic Sciences, American Journal of Physical Anthropology, Canadian Society of Forensic Sciences, Surete, American Journal of Forensic Medicine and Pathology, Forensic Science International, and Journal of Bone and Mineral Research. Dr. Reichs also contributed the Foreword to several other professional works, including a series of science books for children.

Dr. Reichs served on the Board of Directors of the American Board of Forensic Anthropology and the American Academy of Forensics Sciences. She has held the position of Vice President for both organizations. She is currently a member of the National Police Services Advisory Council (RCMP) in Canada.