10,000 Hours. My interview with American University

As a forensic anthropologist,Kathy Reichs, CAS/BA ’70,studies human skeletons—bones—in hopes of identifying victims and pinpointing their cause of death. After decades at the forefront of a relatively small field, Reichs—inspired by a wealth of intriguing, tragic, and sometimes downright creepy stories—crafted her first novel in 1997. Eighteen books and one long-running television show later, Reichs’s Temperance Brennan protagonist is among the most beloved characters in the world of murder mysteries.

Wrote—by hand—two books, a mystery and a romance. “Needless to say, they’re hideous.”

Moved to Washington when her husband was transferred to the Court of Military Appeals and enrolled at AU to finish her undergraduate degree. Went into labor in an anthropology course; delivered her first child, daughter Kerry, at Bethesda Naval Hospital.

Saw her first human remains at the Catoctin River basin. “My digging partner and I came across a burial. I was fascinated.”

Consulted on her first case: a murdered 5-year-old girl, whose bones were discovered months after her disappearance. “Even though the case was never prosecuted, I was compelled to continue with the forensic work.”

Became one of only 111 people certified by the American Board of Forensic Anthropology.

Went to Montreal on a national faculty exchange. Started working for Quebec’s central crime and medicolegal lab. Continues to consult for the lab to this day.

Consulted on the case of Serge Archambault, who murdered at least three people in Quebec. Theorized killer was a butcher or orthopedic surgeon, based on his knowledge of anatomy. “Turned out he was a butcher.”

Intrigued by the Archambault case, began writing her first novel. “Most people hadn’t heard of forensic anthropology—I wanted to bring the science to a broader audience.”

Published Deja Dead, the first of her 18 Temperance Brennan novels.

Hired by the United Nations to testify at a war crimes tribunal in Rwanda. Case involved a man accused of killing and burying 29 people on his property in Kigali.

Helped exhume a mass grave near Lake Atitlan in the highlands of southwest Guatemala. The experience inspired her fifth book, Grave Secrets. “A lot of the victims of that civil war were women and children; a lot were Mayan peasants.”

Deployed to the World Trade Center after 9/11 by the Disaster Mortuary Operational Response Team. Worked 13-hour shifts identifying human remains at the Twin Towers and Staten Island landfill. “When we found human remains we would bag it and tag it because it had to be identified by DNA. That went on for years.”

First episode of Bones, based on her Temperance Brennan novels, aired on Fox. Today, it’s the longest-running scripted, non-animated show in the network’s history. Reichs is a producer and cowrites one screenplay a year with her daughter, Kerry.

Cowrote Virals, her first young adult novel, with her son, Brendan, a “recovering attorney.” The pair has written six in the series.

Writing her first non-Temperance Brennan novel. “I’m creating a whole new character. She’s not a private investigator, but she agrees to take on this particular case because of her dark past. I wanted another strong female heroine, but she’s a little damaged, this one.” 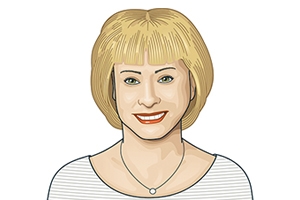